Labour markets, between heaven and hell

"A special report on the world economy", The Economist﻿
Posted by Sebi Buhai at 2:06 PM 6 comments

Not that I want to brag or anything but... please check this out again and then go to the Nobel prize site to see who won this year's Prize in Economics (by the way, last year I predicted Hart, Holmstrom and Williamson, hence I also got there one of the awardees-- just in case you were wondering if I predict the same every single year).
Anyway, while you can check out all the press release on the 2010 Econ Nobel prize directly from the source etc., some very brief and fast personal points on Dale Mortensen. I feel privileged to currently have Dale as my postdoctoral guide and host at Northwestern University (and to have known him over the years, particularly via the LMDG research group in Aarhus, but in fact already from my PhD years at the Tinbergen Institute Amsterdam--when probably in 2003 or so I took my first search and matching short course with him teaching it); I am also grateful to have taken part in several events organized by Beverly and Dale Mortensen in Chicago/Evanston; and, it so happened that I was having lunch with Dale and a couple of others here in Aarhus-- yep, you have to be in the right place, at the right time!-- some hours ago (and minutes before the actual Nobel prize announcement) when he received that phone call from Stockholm. That is pretty amazing, you know, to be part of this very moment... all that suspense and then the smiling confirmation... with Dale stating he is not supposed to acknowledge anything yet :-)... Thus we started John Abowd's invited seminar here at the Aarhus School of Business (of course Dale went on with attending undisturbed the seminar-- a scientist to the end!) with champagne and the live online Econ Prize announcement from Sweden.
Finally, at this very moment they do not seem to have put up a picture of Dale on the Nobel prize site yet (while they have found portraits of Peter Diamond and Chris Pissarides), so I'll just place up a photo with Dale and Beverly in their kitchen in Evanston, this summer, preparing to serve (some very lucky) us an absolutely delicious Mexican dish. Congratulations once again, Dale Mortensen! 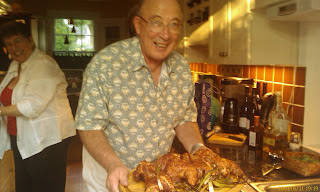 PS. Pictures/videos from after the prize announcement might follow late...r on, depending when/if I have time to actually sort them out.
Posted by Sebi Buhai at 10:55 AM 2 comments

Some names are recurrent in the betting pools, but-- as usually-- it does not appear that anybody has a very clear favourite for this year's Economics Nobel, and that seems true even in terms of the Econ area(s) to be currently rewarded. Thomson Reuters' predictions are sampled from a pretty varied set topic-wise. Harvard , Chicago and Northwestern / Kellogg  seem all to be somewhat home biased for the leading pick, though with very heterogeneous faculty preferences in the rest. And when the experts disagree to this extent, you will rightly ask yourselves if there is any point in attempting a forecast.
But, as you came here anxious to get my prediction for tomorrow: I think it is high time search theory was recognized for its significant contributions to a great many Econ subdisciplines (inter alia, search is responsible for crucial modelling advances in Labour Economics, Consumer Theory, Monetary Theory, and way beyond) -- with Peter Diamond, Dale Mortensen and Chris Pissarides as its very deserving pioneers. This was my favourite option also last year, but I assign it a much higher probability of success now. That being said, I hope Dale would not change the dinner plans tomorrow evening  if he does get the phone call :-).
Posted by Sebi Buhai at 3:57 PM 5 comments

A blog by Sebastian Buhai

Other blogs worth browsing