Born in the anonymity of the blogosphere 5 years ago, this weblog grew up a curious, motivated, and responsible toddler: its (no longer) secret ambition remained no less than saving the world-- despite repeated trials of dissuasion by its author, who once foolishly pledged allegiance to the infusion of blogs about nothing. Thus, as this blog claims and proved a certain maturity, it will receive two significant presents for its half decade birthday. To be shared with its select audience:
Posted by Sebi Buhai at 12:41 AM 6 comments 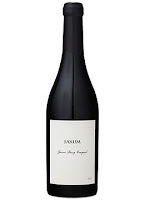 I believe it is the first time since I know it-- though it might well be first time ever--that Wine Spectator's top 10 is dominated by New World wines. The winner is Saxum, James Berry Vineyard Paso Robles 2007, "[a]n amazing wine, dense, rich and layered, offering a mix of power and finesse, with concentrated dark berry fruit, mineral, sage, herb and cedar notes that are pure, intense, focused and persistent. Grenache, Mourvèdre and Syrah. Drink now through 2018" . So we shall!
All in all, there are 5 Californian and 2 Australian wines in top 10, while the old wine powers  (Italy, Portugal, France) have representatives relegated only to places 8-10. I have not tried to date any of WS's 2010 top 10 choices, but this set is so intriguing that I am gonna start getting hold of these wines right now. Remarkable as well is the fact that the French wine selected, a Clos des Papes Châteauneuf-du-Pape, is-- you will hardly believe-- a white, from 2009 (which costs precisely 100 bucks a bottle). That is what I call success of this brand: recall that the 2007 wine of the year was a Clos des Papes Châteauneuf-du-Pape '05; moreover one of my favourite wines ever (arguably, influenced by the ambiance and entourage in the place where I have tried it last) was an egoist  Clos des Papes Châteauneuf-du-Pape '06. All reds: high time we tried their top white, indeed.
Finally, two more brief notes: a) in the full top 100 for 2010, there is a splendid Hungarian wine, which I have tasted a couple of times-- and I am glad the WS editors have eventually discovered it-- a Royal Tokaji Aszú 5 Puttonyos red label from 2006, on position 28-- if you're passing through Budapest, do not leave without it;  b) one of the only two wines in top 100 to obtain the absolute 100 tasting points (the overall ranking is established on more than pure taste assessment-- what I do not particularly like, but well...) is the Dow Vintage Port 2007 (14/100). Now, people who know me well will be able to confirm that I am the biggest fan of Dow's 1994 vintage, hence if the '07 is acclaimed by WS as "[t]he greatest Dow ever made", I look forward for a touch of the sublime, no less.
Posted by Sebi Buhai at 7:38 PM 0 comments

How do you get talented, self-absorbed, often arrogant, incredibly bright people to work together?

While the preamble looked rather promising, the Chicago Michelin stars seem to have been awarded in a hurry (in fact: the results were already out yesterday, a day before expected) and the upshot is at best sloppy... Do not get me wrong, many places on this list were expected to be there. If you look at my forecast in the earlier blogpost, I actually predicted correctly 10 of the 23 places eventually awarded stars, while nominating only 5 eateries that eventually failed to get at least one Michelin star. Moreover, among the places I foresaw as "obvious" choices, I had only one that was not rewarded with at least one star. And therein lies precisely the biggest problem with the selection of the Michelin undercover inspectors (who, no doubt, work hard, but my feeling is they worked less hard than their NYC counterparts-- 9th bullet point).
But to the point: I fail to understand how a place like Moto did not get at least one star. While my in depth review of that place (with inter alia, photos of most of my 20 grand course tasting dinner menu) will follow at some point, it should suffice to say that in my view that place ought to be higher ranked than (the otherwise impressive) Michael Mina's in San Francisco, which is a 2-star Michelin, or so it was when I checked it out, as now it appears to have been kicked out of the San Francisco Michelin starred list.... And while the variance in quality among the dishes in that 20 grand course was indeed higher than at Noma's (but then again, I leave it up to you to name a place where that assessment would not be true today, when Rene Redzepi simply rules above all: the fact that Noma still has only 2 Michelin stars might be the very proof of Michelin continuing with... well, slightly different standards), quality was still superior to that of most places I have tried earlier, plus the food was extremely-- I do actually mean extremely-- daring and creative. But I guess these are features that American-trained Michelin inspectors failed to notice? Anyhow, to add to potential mishaps, L2O (disclaimer: did not try it yet, some of my sources loved it, but others did not find anything special to it despite several trials) managed to collect the 3 stars grand prix (I thought of them more of a potential 1 star candidate), and that despite their top chef recently leaving them, action which is normally associated in the Michelin world with losing one or even more stars. Mais enfin, obviously I have now placed L2O very high on my priority list, so that I check it out for myself: I'll report then back to you on this :-).
The other huge problem, already anticipated in the earlier post on the Michelin-in-Chicago, is that places like Avec and Sweets and Savories failed to be recognized even in the Bib Gourmand category (with particularly Avec a no-nonsense candidate even for 1 star). Avec is by all means one of the best eateries in this city, while Sweets and Savories is in my view the best quality-price ratio I have tried as yet (better than The Girl and The Goat, or Hopleaf, or the other Chicago Bib Gourmands I have tried to date, as to that particular dimension). While I did not necessarily think these two places should be within the starred Michelin category, failing to recognize them even in the Bib Gourmand (while, truth be told, adding some places among the 46 in that category that some of my gourmand sources find at least odd...) raises big question marks.
All in all, too many 3- and 2- Michelin stars among the recognized eateries, missing at least one potential 1- or 2- star place, and further ignoring at least two noteworthy Bib Gourmand restaurants. That is bad enough, even for a very first assessment of the Chicago culinary scene.

Update: Jean-Luc Naret on the Chicago Michelin stars. Some things above find an explanation (the ranking was finalized already in September; Avec has been closed for a great while; Laurent Gras might return?) but I am not satisfied.
Posted by Sebi Buhai at 4:31 PM 2 comments

The starred restaurants will be known only in two days, but meanwhile here is the Bib Gourmand list (via Fred, who's actively tweeting lately): Michelin's 46 Chicago places that will give you plenty of bang for your buck. I have tried already six very nice places from this list (and have had about another dozen on my priority to-check-out list); time permitting, I will be at some point back with detailed impressions. Meanwhile, here they are, in (weakly) descending order of my current (overall: food quality, ambiance, location) preference-- highly recommended!
I further think they are missing at least two important restaurants in the Bib Gourmand set, unless they actually plan to reward them with a Michelin star, which would not be that surprising: Sweets and Savories, and respectively Avec, both of which have a similar position as The Girl and The Goat in my ranking.
As for the Chicago Michelin stars, my bets are the following. First, my obvious choices: Alinea (my top ranked must-try-place in Chicago; number 7 in the 2010 San Pellegrino top 100-- and the only Chicago eatery in there!-- must translate in two or three stars); Moto (had a fabulous dinner there, just second to my two experiences at Copenhagen's one and only Noma, on par with my very recent experience at NYC's exquisite Per Se or Tokyo's unforgettable Les Creations de Narisawa, and-- I would venture to say-- superior to my otherwise superb dinner at San Francisco's Michael Mina); Spiaggia (best Italian I've tried as yet: must be starred). Other obvious favourites for one or more stars (all on my still-have-to-try Chicago list): Charlie Trotter's, Tru, Topolobampo, Blackbird; finally, some further potential candidates, particularly for 1 star: Schwa, L2O, Takashi, Northpond, Sprout, Sepia, Michael, Les Nomades (plus, as stated above, places that impressed me earlier like Avec and Sweets and Savories, which do not appear in the Bib Gourmand set). Stay tuned, less than two days left!
Posted by Sebi Buhai at 7:38 PM 3 comments

A blog by Sebastian Buhai

Other blogs worth browsing